We have had chickens for about 2 years now and they have all been just backyard chickens, and a few roosters, with dark coloring. We have even hatched some of our own at this point. One fateful day while I was on my way to work I saw a chicken in the road. So I pulled my truck to a stop in the road until the chicken made it across the road. After it had I decided I had to get a picture of this random moment. So I get out of the truck and get as close as I think this chicken will let me, and she just sits. So I get closer and then closer until I am within arms reach. I reach down and pet her and she still doesn’t run away. At that point I decide I want to take her home. As I am picking her up, an officer pulls next to my truck and asks if everything is okay. I tell him that I just found her and was going to take her home to my chicken coop to get her off the road. To that he replies “Sounds like the chicken crossed the road to go home with you. Haha” 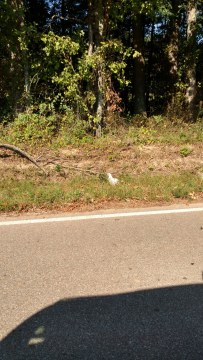 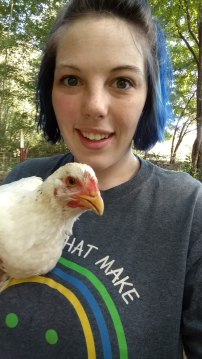 I get her home and close off part of the chicken house so that she can remain separate from the flock until I can come home from work. She seems very weak and doesn’t move around much at all, so I leave food and water near by so she can get a bit stronger. 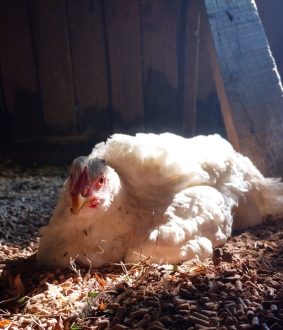 When I came home from work later that day she was moving around a bit so I let her join the rest of our chickens. She still didn’t seem quite normal, but we thought that maybe she just needed to regain her strength. One the second day I came out and found her sitting on her bottom outside the chicken house. Since we had never seen any of our chickens behave this way we started asking around to see what could be the cause. The best we found was that she was probably egg bound and would die.

I was driving to town later that day and took the same road I found the first white chicken. To my surprise there was another chicken running around in the road. 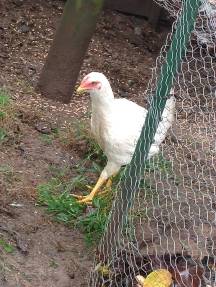 I got out and caught her and took her back home with me. The first white chicken died that night and we found her when we woke up. We cleaned her body out of the chicken run and disposed of her body away from the other animals.

Since that day Blanka has doubled in size so that she is a plump chicken. Since it is cold outside right now, our chickens aren’t laying a lot of eggs right now. We aren’t sure what color her eggs will be, but we are going to try and hatch some chicks with her white feathers next spring.